"Your satisfaction is my priority!"

2020-01-18
The name of this historic neighbourhood is apt as buildings and walls almost seem hewn from their craggy surrounding. Located southeast of downtown and northeast of Beacon Hill Park, this urban area roughly flanks Rockland Avenue and is the northern portion of the official city neighbourhood of Fairfield. In the 1860s, Cary Castle was built on the highest point and used as residence by the Governor of Vancouver Island, and then the Lieutenant Governors after BC entered Confederation in 1871. The castle was destroyed by fire in 1903.

Built by coal baron Robert Dunsmuir, Craigdarroch Castle is a National Historic Site in Canada; fully restored to provide a window into the world of 1890s privilege.  https://thecastle.ca. The castle’s four floors of intricate woodwork, stained glass windows, and opulent Victorian-era furnishings are well worth exploring.

The Government House, located on the traditional territory of the Songhees and Esquimalt First Nations, is the ceremonial home of all British Columbians. The beautiful, ornate gardens are accessible to all via a wheelchair-accessible path. During their tenure, many Governors have left their indelible mark on the garden’s developing grandeur.

Rockland is largely residential with some commercial zoning along the northern boundary. Many of the mansions have been converted to suites to provide a mix of apartments, townhouses, single-family homes, and care facilities. Throughout its recent developments, the neighbourhood successfully retained its Victorian elegance. 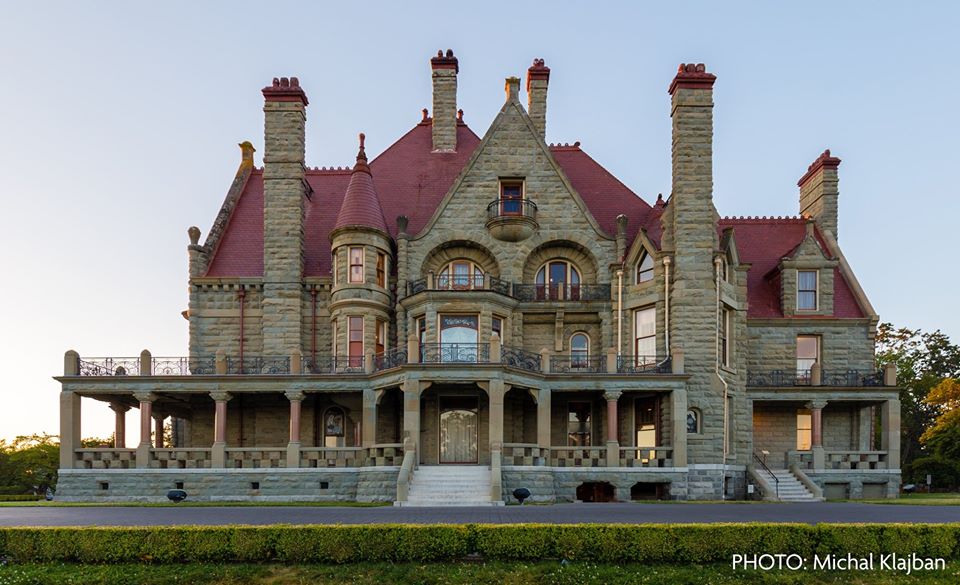 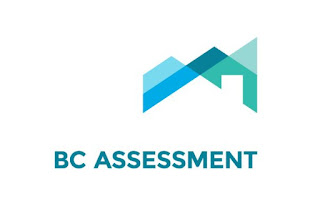 Typical assessments for strata units in Nanaimo increased by two per cent, in Courtenay an increase of eight per cent, and in Campbell River 10 per cent.

The most highly assessed property in the region was once again James Island, at $56.47 million as of July 1, 2019. In the previous assessment, the island was valued at $56.76 million.

The Island roll increased in value to $255 billion from $246.9 billion in 2019. About $4.14 billion of the Island’s assessments reflect new construction, subdivisions and rezoning of properties.

Did the Speculation Tax Have an Impact on Real Estate Activity?

Not really, according to David Langlois, incoming president of the Victoria Real Estate Board. He opined the greatest impact on real estate activity came from the lending rules.

“People’s buying power got reduced substantially in some cases,” he said, noting buyers who may have been considering the $1-million range were being forced to look at homes below $800,000. “It compressed activity into a particular price point.”

That means there were several categories of buyers looking at a limited supply of houses which creates a seller’s market and higher prices at the lower end of the spectrum, while sales slow and values decrease for homes in the million + range.

The Canadian market hasn’t seen such a shortage of listings since 2007.

2020-01-14
With strong job prospects, low mortgage rates and population growth, real estate inventory is flying off the shelves and not enough new inventory is being built to replenish supply. More cities, including Vancouver and Victoria are likely heading towards, or already are in, a seller’s market once again.

“Essentially, after a couple of challenging years for housing, the market has picked itself up, brushed itself off, and is now looking at steady gains ahead,” wrote Bank of Montreal chief economist Douglas Porter in late December 2019.

With home sales momentum showing no signs of fading in 2020, all eyes will be on the supply side of the market. Can developers and builders catch up and keep up? 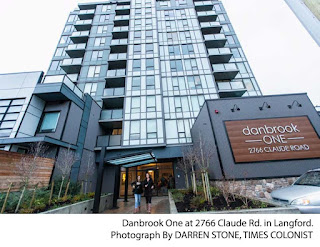 It’s always a problem when a building is not completed to code. On December 20th, most residents, unfortunately, had to move out of the brand new, 86-unit building in Langford at 2766 Claude Road in Langford due to gravity system concerns. (“Gravity system” simply means the vertical loading support structure for a building).

The Engineering and Geosciences organization governed by B.C. legislation has not disclosed what they deem to be confidential information regarding the situation at Danbrook One, but their investigation and discipline processes will determine if a professional engineer or geoscientist has failed to meet the professional standards or ethical obligations of the professions.

Meanwhile, the city of Langford, the public and several developers have pitched in to help displaced residents of the building with funds to alleviate some of their expenses.

Property Assessments Arriving in Your Mailbox

2020-01-10
If you read the Times Colonist on Friday, January 3rd, you saw the front-page review of tax assessments now hitting property owner’s mailboxes across the Capital Regional District. If you haven’t received your property tax assessment yet, you can access it through bcassessment.ca.

The condo market saw values rise across nearly every municipality in Greater Victoria; from two per cent in Saanich, Oak Bay and Esquimalt to four per cent in Langford and Colwood.

Keep in mind, these assessments are an estimate of a property’s market value as of July 1, 2019. If you find yourself in disagreement with your property assessment, you have the right to submit a notice of complaint by January 31st to ask for an independent review. The property assessment review panel members are appointed annually by the Ministry of Municipal Affairs and Housing and they meet between Feb. 1 and March 15 to hear complaints. 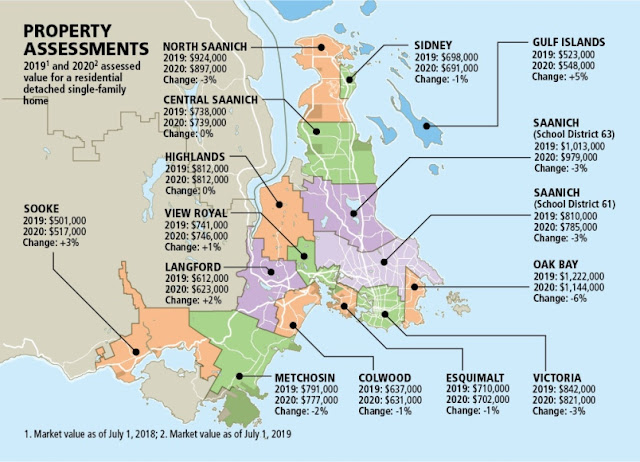 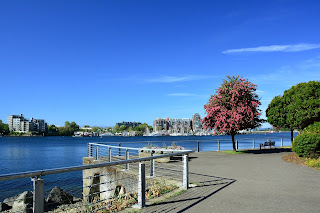 Vic West is a diverse neighbourhood with modern harbour-front condominium complexes such as the Railyards and Dockside Green, historic hilltop homes and single-family residences.

Geographically, this rapidly growing community is surrounded by water. It features scenic shorelines and accessible walkways, including Songhees Walkway, which connects its shipyards, marina, numerous parks and the Vic West Community Centre in Craigflower Village. On its western border lies the town of Esquimalt.

The Galloping Goose provides a beautiful pathway for cyclists and pedestrians which allows them to commute from the city centre through Vic West to areas to the north over Portage Inlet.

The Vic West Elementary school (SD61) serves families who have children in kindergarten to grade five.

Vic West is an eclectic mix of architecture and community personalities. 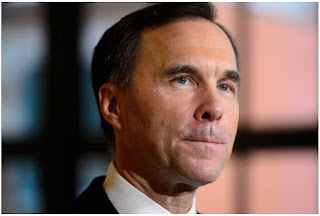 Canada has stress tests in place for home loans that are insured against the borrower defaulting on their payments and those that are not. The insured test was brought in by the finance ministry, while the uninsured test was instituted by the Office of the Superintendent of Financial Institutions.

Canada’s real estate industry has been critical of the stress test since its inception – especially on uninsured mortgages - for being a drag on the housing market. One being it wasn’t adjusted following a rise in interest rates which put pressure on borrowers.

In his considerations, Morneau must adhere to key principles for implementing the government’s fiscal plans. They include:
•Reduce debt-to-GDP
•Preserve Canada’s triple-A credit rating
•Continue investment in “people and in the things that give people a better quality of life”
•Preserve “fiscal firepower” in case of an economic downturn 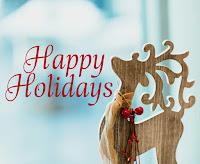 Wishing all my clients and families a wonderful Christmas and a very Happy New Year.

Thank you for trusting me with your real estate needs, and I'm looking forward to serving you in 2020.

Wait for a Price Correction, or Buy Now?

2019-12-22
The results from many polls reveal many people feel they should wait for a real estate price correction before they buy. While I can’t fault them on waiting, I always raise a note of caution that it’s exceptionally difficult for anyone to time the market. A quick look at the history of price corrections in Greater Victoria using prices adjusted to 2018 dollars demonstrates why.

In 1994, the people who said, “let’s wait on the sidelines for a price correction” were right for about a year and a half while we saw single detached home prices drop 12 per cent until 1996. However, if they kept waiting because they were hoping for an even larger dip, they waited in vain for the next six years while prices essentially flat lined. In 2002, prices exploded and rose an astonishing 105 per cent. Few saw it coming. Anyone who wasn’t already in the market missed out on the massive surge in appreciation.

In 2011, those who said “wait for a price drop” were correct while prices dropped 10 per cent. But those waiting after 2014 were disappointed as prices once again took off rising 40 per cent.

The problem with waiting on the sidelines for a price correction is, no one knows what housing prices will do in the short term. I encourage my clients to keep in mind what home prices have done over the last 55 years; a steady rise in average value from $80,000 to over $900,000 (in 2018 dollars). Instead of being concerned about timing the market, it’s better to buy when you are qualified, financially capable, and ready to take on a first or new home. Your finances are within your control.
The housing market is not. (Graph courtesy of House Hunt Victoria). 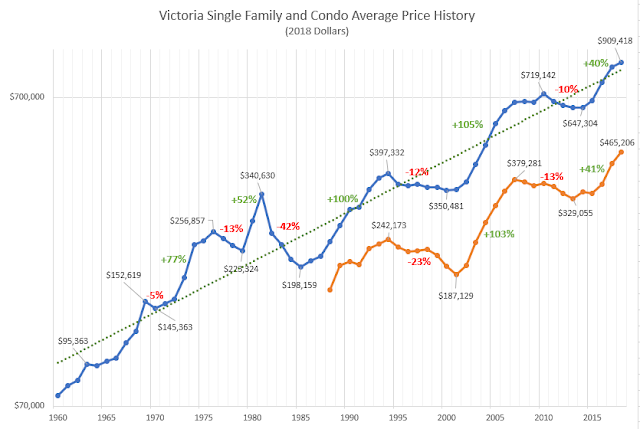 Did the Speculation Tax Have an Impact on Real Estate Activity? 2020-01-16

Property Assessments Arriving in Your Mailbox 2020-01-10